As I touched down in Sao Paulo today it was great to hear news of the first Brazilian in space.  According to the BBC Lt. Col. Marcos Pontes took with him a Brazilian flag and a football shirt – to help his team in the World Cup (like they need any help!). A Russian Soyuz rocket carrying the first Brazilian into space docked with the International Space Station on Saturday two days after lift-off from Baikonur. Apparently Pontes will spend nine days on board, while a Russian and a US colleague accompanying him will stay for six months. Sounds like a nice holiday.. 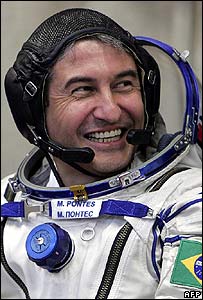 Pontes’ flight coincided with celebrations of the 100th anniversary of Brazilian aviation pioneer Alberto Santos-Dumont‘s successful flight of a fixed-wing airplane in Paris in October 1906.