England beat Jamaica 6-0! Amazing! A guy on the train asked me the score last night, and was obviously disappointed. So I added I’d seen them play against Ghana – and told him they’d lost 4-1 and was not surprised. By this time the guy realised he’d asked the wrong fellow to buoy up his spirits!

Anyhow later on to a party thrown in Bayston Road in Stoke Newington where I first lived in London. By all accounts Tony, a guy who was rumoured to have a flat in Manhattan on a fixed rent, was there with the sister of Cherie Blair. Of course this inspired the paranoia of some, and the amusement of others. I related the story from Doron, a barrister from Holborn I met a couple of times and who used to speak to his mother every day on the phone (sorry). He’d met Cherie back in the day at chambers and had been chatting with her, and voiced his opinion that Tony Blair was some careerist loser. Only later did he realise who he’d been talking to..

Pele pic below included for no reason except to promote the Samba Boys blog once again which carries this pic! 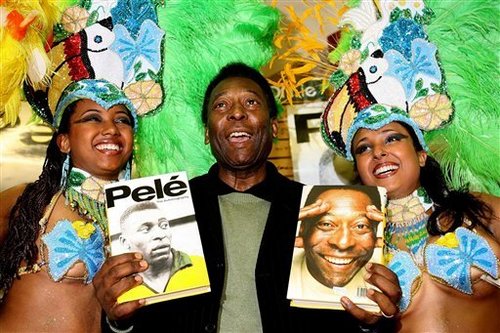