An individual’s network may well be worth more in ROI terms than them, say smartFOCUS. Are you valuing the networks of your customers, as well as individual customers?

To value your own online network why not try the ‘Facebook Visualiser’ tool created by Sebastian Van Sande below to to graphically explore your Facebook connections?

“You can use it to see how all your contacts are connected to each other, and in the process disclose unknown common friends. Other FOAF (friend-of-a-friend) disclosure would be interesting, but unfortunately, the Facebook API doesn’t include this important bit of data.The tool allows filtering your network by Gender and Relationship Status (single, engaged, etc). You can also choose to see the inner connections of your Facebook network and play with the distance between nodes (friends), ” says Sebastian. 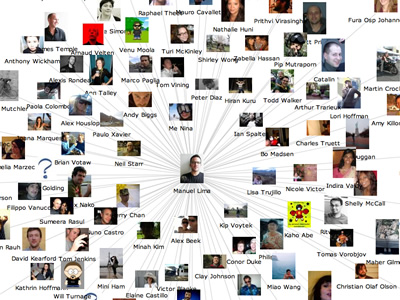 There’s also some fun tools out there for Twitter, such as TweetValue. Sadly my profile wouldn’t even buy me a second-hand Buick!

I see the social network for business Xing has created a Facebook api which also helps you value your network, though with only 136 fans that hasn’t really caught ‘fire’.

Of course if you get bored of these tools you can get serious and look into some of the theories about network value in a wider sense, as in the case of the Forbes article ‘How To Value Your Networks’ which gets into “Beckstrom’s Law”:

“Here’s an example: Say you purchase $100 worth of stuff from Amazon each month over the course of a year. You could probably buy that stuff offline for about the same price, but you might pay extra for gas to drive to the store and an opportunity cost for your time. If the brick-and-mortar commerce cost amounted to $50 a month on top of the $100 you spent on books, then the value of Amazon’s network to you would be $600 a year. Subtract from that the cost of connecting to Amazon’s network, perhaps $40 a month for an Internet connection and computer hardware, and you have a value of something like $120.

And here’s the catch – at some point more network members actually negatively impacts on the network’s value:

“Beckstrom says that network value should be a big concern for social networks like Facebook and Twitter, which all want to scale to massive numbers of users. Since users are typically concerned only about how much the network is worth to them, there can be an inflection point where suddenly each new user makes life harder for existing users. That’s where Bill Gates comes in. For him, the value of Facebook’s network decreased with every new user who sent a friend request his way. The idea contrasts with a popular assumption called Metcalfe’s Law that values networks based on the square of the number of users.”

Does this predict the eventual demise of Facebook? Let’s suck it and see, I think. In the meantime if you are in the business of online social networks check out some of the ideas already patented thanks to the Xyggy Patent search engine. For example, check out Jaime Solari’s invention which provides a method, system and program product for calculating relationship strengths between users of a computerized network.