I like to think I understand the relationship between simplicity and complexity as well as this guy because I’ve approached it through people’s understanding of the world from an everyday perspective. Put me to the test and ask a complex question and demand a simple answer? For example how to generate revenue from your online community manager.

Perhaps a useful start to demonstrate the value of simplicity would be to go through Facebook and figure out what does what, such as the privacy controls, and convey that on this blog in a simple way.

But first maybe it’s worth just reading this post from the New York Times on the ‘heterogenous organisation of data’ (nerd dry humour, ey!), that’s Facebook’s privacy options, and Facebook’s response. Then have a read of the practical privacy advice from Fast Company. Before digesting the passionate blog post on this subject from Danah Boyd. 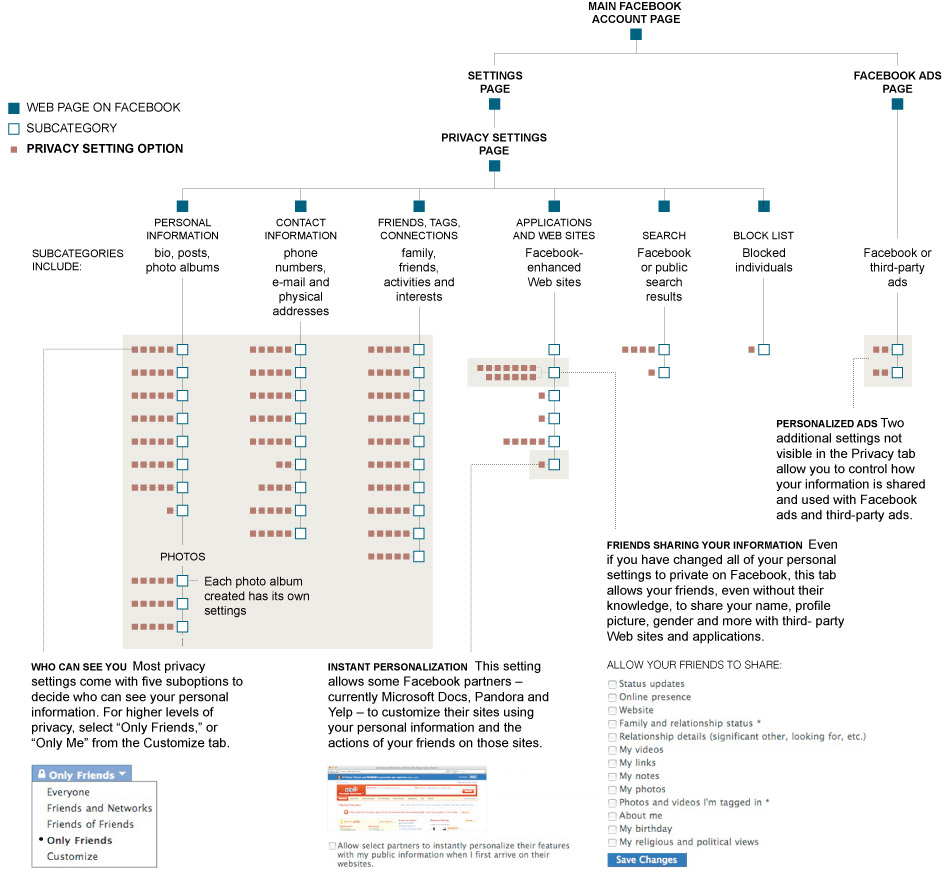 And for balance, on Mark Zuckerberg’s perspective, I turned (in the storeway of WH Smith’s in Leicester Station) to the US edition of Wired Magazine to this choice set of quotes, as part of a piece on hacker culture titled ‘Geek Power: Steven Levy Revisits Tech Titans, Hackers, Idealists’:

Unlike the original hackers, Zuckerberg’s generation didn’t have to start from scratch to get control of their machines. “I never wanted to take apart my computer,” he says. As a budding hacker in the late ’90s, Zuckerberg tinkered with the higher-level languages, allowing him to concentrate on systems rather than machines.

For instance, when he played with his beloved Teenage Mutant Ninja Turtles, Zuckerberg wouldn’t act out wars with them, like most other kids. He would build societies and pretend the Turtles were interacting with one another. “I was just interested in how systems work,” he says. Similarly, when he began playing with computers, he didn’t hack motherboards or telephones but entire communities — manipulating system bugs to kick his friends off AOL Instant Messenger, for instance.

Like Gates, Zuckerberg is often accused of turning his back on hacker ideals, because he refuses to allow other sites to access the information that Facebook users contribute. But Zuckerberg says that the truth is just the opposite; his company piggybacks — and builds — on the free flow of information. “I never wanted to have information that other people didn’t have,” he says. “I just thought it should all be more available. From everything I read, that’s a very core part of hacker culture. Like ‘information wants to be free’ and all that.”

Ironically as a result of Facebook’s new Community Page feature a new community on hacker culture has been created. And talking of communities – from a community management p.o.v. what this reminds me of is trying to match up role permissions in the admin of a community cms like Drupal to what is good practice for community management in terms of who does what. Now let me admit that this can itself get very complicated, so my sympathies with the privacy team at Facebook. For proof of the complicated nature of this project I recall it felt like a minor achievement when working with one client’s community manager we identified a small error with one specific aspect of a role permission – and then sorted it out ourselves without needing to ‘triage it’ with a developer.

The second reason I know from personal experience of how complicated it is was working on trying to get a good practice matrix of roles and permissions sorted working at SiftGroups. I still have Lawrence Clarke’s words ringing in my head, instructing me to order the allocation of roles to permissions in terms of what roles cannot do, rather than set up by what they can do. Online community roles and permissions and their integration with online community good practice is not easy in other words, but perhaps it can be easier if we can keep it as simple as possible?

On the subject of monetizing your online community, which I’ve also written about recently, I see SiftGroups is holding a great looking workshop on 26 May titled ‘Creating an integrated social media strategy’ which includes a module on that very subject, at the appropriately sounding location of Royal Mint Court in London.

So it appears I’ve moved on from privacy to marketing; for me it’s clear that the new social media marketing mantra is that less control equals more sharing. That’s from marketing guru David Meerman Scott. He should know his passion even got him fired from his corporate job at Thomson’s, but perhaps it’s because he’s also a Grateful Dead fan! But to hear the full story see the webinar below, in which he spells out the new viral rules of the ‘world wide rave’ which also comes in book form too if you’re interested…