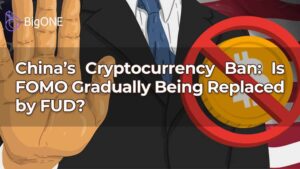 After the People’s Bank of China (PBoC) prohibited cryptocurrency transactions and mining the price of Bitcoin and other cryptocurrencies fell as a result. In the last 12 years, China has banned cryptocurrency around a dozen times. Every time they impose a ban on crypto currencies, they instil FUD (Fear, Uncertainty, and Doubt) in the crypto community within China and abroad. Is the recent decision to impose another ban on crypto activities shifting the market’s current state from FOMO (Fear of Missing Out) to FUD (Fear, Uncertainty, and Doubt)? I would like to discuss this with the BigONE community.

China FUD vs. Crypto
Going down memory lane, China has taken several anti-crypto stances since the early days of Bitcoin following its launch in 2009. China’s Ministry of Commerce banned virtual currencies from paying for goods and services in June 2009, just a few months after the first Bitcoin transaction. The decision was reportedly made to limit the use of video game currencies, which were allegedly devaluing the Yuan at the time.

Since then, China has taken many hostile stances toward crypto activities. At first, it was stated that it was not a “real currency.” Another instance of FUD that stood out in this back and forth was false news published by Weibo in March 2014. According to reports, the “PBoC has imposed an outright ban on Bitcoin transactions”. This false news completely destabilized the market, causing thousands of traders and investors to liquidate their holdings, and Bitcoin, which was trading at around $1k at the time of the news, fell in value by half in just three months. Fast forward to 2021; China has stepped up its anti-crypto campaign in the last four months. First, regulators launched a massive crackdown on Bitcoin mining operations. The crackdown had a significant impact on the cryptocurrency scene because China housed 75% of the world’s Bitcoin miners at the time.

Then in July, it was revealed that the PBoC had shut down a tech firm that provided software services to cryptocurrency firms. The price of Bitcoin immediately dropped because of this news. Finally, on September 24th, the PBoC announced that all cryptocurrency transactions in China are illegal. As a result, the price of Bitcoin fell by more than 5%, causing traders and investors to liquidate their positions. Ironically in the US, where talk of crypto regulation from the SEC has been spreading its own FUD, the news from China could slow the drive to clamp down on Crypto. Notably Senator Pat Toomey tweeted that, “Beijing is so hostile to economic freedom they cannot even tolerate their people participating in what is arguably the most exciting innovation in finance in decades. Economic liberty leads to faster growth, and ultimately, a higher standard of living for all.”

While this appears to be, to coin a phrase conjured by a recent Bloomberg article, a “peak FUD moment for crypto” the fact is the actual impact on Bitcoin’s value for these government actions may be over-exaggerated. As the article in Bloomberg went on to say: “The remarkable thing is that — like the proverbial “wall of worry” that never seems to hurt the stock market — growing FUD never seems to do much damage to the value of crypto assets. At least, not for long.

“Yes, Bitcoin is down 5% following China’s latest ban on all crypto transactions and vow to root out mining of digital assets, but that’s just another day in the virtual office for this volatile asset class. Bitcoin and other coins actually were hit harder earlier this week when concerns over China Evergrande Group spread throughout all manner of global markets,” the article noted.

The rise and fall of FUD
FOMO has increased in the crypto scene due to the rapid growth of Bitcoin and other cryptocurrencies in recent years. To put it simply everyone wants to profit from cryptocurrency price increases. As a result, as new users enter the crypto scene, the adoption rate rises. At the same time the emergence of cryptocurrencies has also resulted in regulatory scrutiny and crackdowns. Despite several hostile actions from China and other regulators, we’ve seen that this caused FUD but for a brief period as the cryptocurrency market always finds a way to recover. I believe that ignorance of the intrinsic value of cryptocurrencies also contributes to FUD, which is why perceptions and news coverage continues to influence the market significantly. After each crypto crackdown by regulators, you have no doubt noticed that Bitcoin often goes on a bull run following a brief price drop.

Although digital currencies may survive China’s recent crackdown on cryptocurrencies, I believe correct information and knowledge about cryptocurrencies and the market are essential for long term success. Still, if news and perceptions continue to influence the market, it is difficult to predict whether FOMO will always triumph over FUD. Will the latest crackdown on cryptocurrency activities lead to another Bitcoin all-time high? The only way to find out is to wait. In the meantime, the knock-on effect in the region may end up benefiting Southeast Asia. Writing in Forkast, Lily Z. King suggests an upside to all the FUD caused by the ban, will drive a significant decentralization of crypto power from China to other markets, particularly Southeast Asia. “As the economy of Southeast Asia has been heavily impacted by the Covid-19 crisis, the new inflow of crypto capital and technology might bring a much-needed boost for their digital economy. Taking the long-term perspective, this diffusion is good for the builder-type among Chinese crypto entrepreneurs and is good for the crypto movement globally,” she concluded.

“The China news is not surprising to those of who’ve been in the crypto currency space for some time, and as with most FUD, I believe the decentralized crypto market and community is resilient enough to get through this.” #anndyliansays